a sermon for the 2nd Sunday in Lent

When Jesus told the disciples that he would suffer, die on a cross, and be raised from the dead, Peter found himself at a cross-roads.  This is the crux of the Gospel: that as followers of Jesus, we must set ourselves aside for the sake of the others.

Once upon a time, a small plane with five passengers on it had an engine malfunction and was going down. The pilot came out of the cockpit with a parachute pack strapped on his back and addressed the group: “Folks, there is bad news, and there is good news. The bad news is that the plane’s going down, and there’s nothing more I can do. The good news is that there are several parachute packs by the wall back there. The bad news is that there are five of you and only four of them. But good luck. Thank you for choosing our airline, and we hope you have a good evening, wherever your final destination may be.” Then he gave the group a big smile and a thumbs-up and was out the door.

A woman leaped up from her seat. “I’m one of the most prominent brain surgeons in the northeast. My patients depend on me.” She grabbed a pack, strapped it on her back, and leaped out.

A man stood up. “I am a partner in a large law practice, and the office would fall to pieces without me.” He grabbed a pack, strapped it on his back, and leaped out.

Another man stood up and said, “I am arguably the smartest man in the world. My IQ is so high I won’t even tell you what it is. But surely you understand that I must have a parachute. He grabbed a bundle and leaped out.

That left only two people on the plane, a middle-aged priest and a teenage boy.

“My son,” said the priest, “you take the last parachute. You’re young; you have your whole life ahead of you. God bless you and safe landing.”

The teenager grinned at the older man. “Thanks, Father, but there are still two parachutes left. The smartest man in the world just grabbed my knapsack.”

Those who want to save their life will lose it, and those who lose their life for my sake, and for the sake of the gospel, will save it.

Today, Jesus teaches us what it means to be his disciple. We are right smack dab in the middle of the Gospel of Mark – at what you might call the crux of the story. Jesus and the disciples are at what you might call a crossroads. He had just asked the disciples who they thought that he was. And Peter had just looked like the smartest man in the world after he gave his brilliant witness, “you are the Messiah!”

Peter thought he understood what that meant. After all, he was on the ground floor of a new movement. He had left his family, his home, and his career to follow a man who he had come to believe was the Messiah, a mighty king who would lead Israel out from under the domination of the Romans. So when Jesus begins to tell his disciples what it really means to be the Messiah, that he would suffer, be rejected, die and rise again, Peter can’t believe his ears. He pulls Jesus aside, and begins pleading with him. SHHHH! Are you crazy? That’s not how this story is supposed to end.

Can any of us really blame Peter? After all, who wants to follow a guy who says that his plan is suffer and die at the hands of our enemy? What kind of Messiah is that? What kind of religion is that, where we worship someone who claims his plan all along is to die on a cross and rise again?

It’s crazy!
It’s foolishness!
It’s….what it means to be a follower of Jesus Christ. 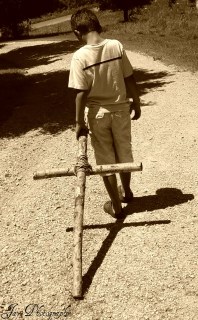 as Jesus makes clear, he didn’t come into the world to defeat the forces and powers of the world with greater force and power. Instead, he came to subvert those forces and powers through sacrifice and love. And more to the point, he expected his disciples – and that means us – to do the same.

If any want to become my followers, they must deny themselves and take up their cross and follow me. For those who want to save their life will lose it, and those who lose their life for my sake, and for the sake of the gospel, will save it. For what will it profit them to gain the whole world and forfeit their life? Indeed, what can they give in return for their life?

Now before we get too far, I have to explain that to deny oneself doesn’t mean “become a doormat for Jesus.” This is not about ignoring our basic human need for love, dignity or respect. This is not an excuse for staying in an abusive relationship or tolerating injustice. After all, Jesus also said, “Love your neighbor as yourself.” We can’t truly love our neighbor without loving ourselves.

Instead, Jesus is calling for us to set aside those things which we do for our own selfish goals and take on those things which makes us part of the larger community. He knew that it is only when we put the needs of others ahead of our own desires that we start understanding what sacrificial love is all about. It is when we give ourselves wholly and completely to others person, that we begin to imitate Christ’s love for us, and God’s love for the entire world. This is how Jesus lived, in perfect relationship with all around him.

When we deny ourselves, we take on a new identity, a new life, and new relationships with those around us. And when we do this, our own lives become infinitely more rewarding.
Instinctively, we know this. We know that when we let go of our own self-interest and align ourselves with something bigger than ourselves, we feel more satisfaction in the work that we do. When we stop focusing on our personal goals and start paying more attention to the needs of others – to our children, our family and friends, to our neighbors both here and around the community – we are filled with new life and enthusiasm for whatever task is at hand.

Of course, this runs contrary to the ways of the “real world,” where we’re taught to look out only for ourselves, and make sure that we get what we deserve. After all, isn’t that what our culture is all about? Isn’t that why our political system is deadlocked, nobody wanting to give an inch to the other guy, regardless of whatever issue might come along? And not just our culture, but Peter’s as well. That’s why he has such a hard time with all Jesus’ talk about sacrifice.

For my thoughts are not your thoughts, neither are your ways my ways,
declares the LORD.

The paradox of the Kingdom of God is that it is upside down and backwards. It comes about when we counter power with love and violence with forgiveness. Or as we say in the Prayer of St. Francis, “For it is in giving that we receive; it is in pardoning that we are pardoned; it is in dying that we are born again to eternal life.”

A couple of weeks ago, ISIS, the terrorist organization that has captured and slaughtered hundreds of hostages in Syria and Iraq, released another gruesome video. They had kidnapped 21 Coptic Christians in Libya, lined them up along the sea, and beheaded them all, simply for being followers of Jesus Christ. These people suffered the ultimate sacrifice when they took up their crosses, and became followers of Jesus Christ.

Afterwards, the Bishop of the Coptic Church in Libya found himself at a crossroads. What would his response be? He decided to forgive the ISIS murderers. “We don’t forgive the act because the act is heinous. But we do forgive the killers from the depths of our hearts,” the bishop said. “Otherwise, we would become consumed by anger and hatred. It becomes a spiral of violence that has no place in this world.”

Jesus said,
Those who want to save their life will lose it, and those who lose their life for my sake, and for the sake of the gospel, will save it.

As we continue our journey with Jesus to Jerusalem this season, let us remember always that the crux of the story, is the cross of Christ.
Thanks be to God.