a sermon for Christmas Eve

The days of the Emperor Augustus, Quirinius and Herod were dark days, times of oppression and brutality, when the people in power quarreled and fought with each other, trying to get just a little political advantage.  Then, everything changed in a moment.

…In those days a degree went out from the Emperor Augustus that all the world
should be registered.

In those days, time itself was marked by who was the most powerful. They were the days of the Emperor Augustus, the days when Quirinius was the governor of Syria, the days when Herod ruled Judea. In those days, Anas and Caiphas were the chief priests of the temple. They were dark days, times of oppression and brutality, when the people in power quarreled and fought with each other, trying to get just a little political advantage. Back in those days, people had to pay taxes to support a government that oppressed them; they had to pay for the army that occupied their land.

In those days, good people survived by minding their own business and not calling too much attention to themselves. They lived their lives in pretty unremarkable ways. Dad might have been a tanner, or a farmer, or maybe a shepherd. Mom certainly took care of the kids and tried to make a home. There wasn’t too much time for much of anything else. In fact, time was shaped by doing whatever had to be done. Everyone had to scratch and scrape to find a job, make a living, doing anything they could just to get by.

In those days, the people were filled with fear. Fear of the authorities. Fear of the people around them. You could only trust your family and your clan, but not anybody you didn’t know. In those days, you never knew when some band of crazies might swoop in and start trouble – wrecking the village, killing people for no reason. In those days, when Augustus was Emperor and Quirinius was the governor of Syria, the people lived in darkness and fear.

In those days, Mary and Joseph had been displaced from their home. They were wandering, looking for a place to rest. Mary was in labor and Joseph struggled to find even the smallest hovel for shelter. Finally, a kind man whose house was already full of refugees, made room for them in his stable – and in that act, he made room for Christ. 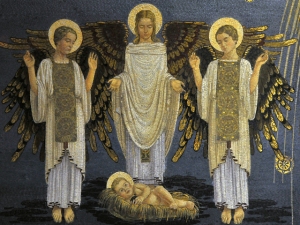 In this moment, something happened to change the world, something so profound that we remember it even today. In that moment, God broke into our dreary, fearful lives, in the form of a baby. The Christ, the Messiah, came into the world and changed it forever. This was the moment when the world was made new. This was the moment when we began marking time not by who was the strongest or the most powerful, or who had the largest and army, or the most money, but by the birth of a baby – not a baby born to some noble, rich, or powerful family, but one born to a poor young woman, from a village in the middle of nowhere, in a stable, among smelly animals, and lying in a feed trough. This was the moment when God broke our dreary, fearful, human history through the birth Jesus the Christ, the Messiah.

At the time, not much of the world noticed. Only a few shepherds, and they are not known to be the most reliable of witnesses. But it did cause quite a stir among the powers-that-be. When Herod heard the news, he was filled with fear, and ordered a terrorist attack on the people, slaughtering so many innocents. And later, when the clergy learned the news, they would plot to kill the man this baby would become. These would be the last gasps of the those dark olden days.

Eberhard Arnold was a man who lived in a dark time. He was a Christian writer who protested the Hitler’s rise to power. He once wrote, “The miracle of God comes not only from above, it also comes through us; dwelling in us. It has been given to every person, and it lies in every soul as something divine, and it waits. Calling, it waits for the hour when the soul shall open itself, having found its God and its home. When this is so, the soul will not keep its wealth to itself, but will let it flow out into the world. [So], wherever love proceeds from us and becomes truth …Christmas is fulfilled as reality.”