a sermon for the 12th Sunday after Pentecost (Proper 16A)

Jesus asked the disciples, “who do you say I am?”  Their very lives depended on their answer.

The start of school always brings back memories of my own time in school. Most of them are good memories, some of them not so good. We seem to learn a lot more from the not so good ones, don’t we? Like those times we went to class and weren’t quite prepared? Maybe it was that time when we didn’t read that book we were supposed to read. You just knew that the teacher was going to come in and start asking questions to see who had read the book and who hadn’t. Or maybe she’d give us a pop-quiz. “Alright, now, everybody clear their desks. I have a little quiz, just to see who’s been paying attention in class.”

There were basically two things you could do whenever that happened. The first was to simply sit calmly and quietly in your chair, and write as clear an answer as you could come up with. This worked particularly well if you had been paying attention in class. The second was to try to bluff your way through it. You might start by restating the question in different words, then make a few casual observations, as if you knew exactly what the book was about. Then you might throw in a few words you might have heard from the teacher in other lectures. Basically, you either knew the answer, or you were busted. 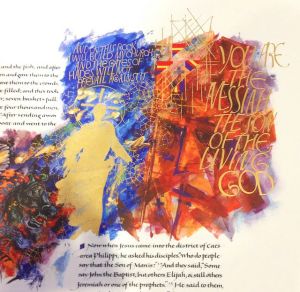 Today’s gospel lesson is something like that day in school. Jesus is walking with his disciples in the big city of Caesaria Phillipi. And as they walked, Jesus asks them a question – who do these people say I am? For the disciples, the question must have seemed like a pop-quiz. Why is he asking us this? So they tried the time-honored bluff method of answering. “Some say you’re Elijah, and some you’re John the Baptist.” Blah, blah, blah. Just filling up space with lots of words, hoping he’d be satisfied with their answers.

But Jesus wasn’t satisfied with their shallow answers because he knew their lives depended on the answer. And so he stops, and looks them straight in the eye, and asks, “Who do YOU say that I am?”

Suddenly the class clown, Simon, answers, clear as a bell. And he says what the rest were afraid to say. Simon tells the simple truth that is at the core of our faith as Christians. He does not hedge his bet; he doesn’t conform to the way of the world by being cautious or wishy-washy. Instead, he states plainly what he’s seen and believes. He opens his mind and speaks that all that is good, and acceptable, and perfect is found in God through Jesus Christ.

“You are the Christ, the Messiah, the Son of the Living God.”

Simon makes a simple confession, and in so doing, he is transformed. From that moment on, he becomes Peter, the rock on whom Jesus built the church.

A few decades later, Paul wrote about transformation in his letter to the Romans:

I appeal to you therefore, brothers and sisters, by the mercies of God, to present your bodies as a living sacrifice, holy and acceptable to God, which is your spiritual worship. Do not be conformed to this world, but be transformed by the renewing of your minds, so that you may discern what is the will of God – what is good and acceptable and perfect.

According to the late Dr. Peter Gomes, this verse from Romans is, “perhaps the most dangerous verse in all the bible…. An invitation to nonconformity… In a culture in which conformity is valued, nonconformity is likely to get one into trouble.”

There isn’t any doubt that conformity was highly valued in ancient Rome. It was a hierarchical society that assumed rigid conformity to its customs and laws. And Paul understood that being a nonconformist, like Jesus, could easily cost him his life. Still he calls upon us to be living sacrifices. And while he does not rule out the possibility that some believers may end up sacrificing their lives for their faith, he also believed that we can subvert the dominant forces of our culture – the forces of money, power and corruption – and still live our lives in faithful service to God. All it takes is discerning what is good and acceptable and perfect. All it takes is becoming a follower of Jesus Christ.

And how do we do that? How do we become disciples? We start by setting aside our concern for ourselves. “Do not think more highly of yourself than you ought,” as Paul put it. For it is only when we give up our focus on our own concerns that we will ever understand the self-sacrificial love of Christ – the one who healed the sick, fed the hungry, and lifted up the lowest members of society. The one who sacrificed himself on the cross for the sake of his friends.

This is what Peter does when he answers Jesus’ question. He sets aside his worry and concern about himself, sets aside his fear about what others might think or say about him. And he steps up. He proclaims who Jesus is in a clear and unambiguous way: “You are the Christ, the Messiah, the Son of the Living God.” And as he declares who Jesus is, he declares once and for all who Peter himself is. He is the First Disciple, the rock, on which Jesus builds everything else.

Each of us need to answer this question for ourselves, too. Who do YOU say that Jesus is? Is he just a nice man who lived a long time ago, someone for us to read about and maybe discuss in a book group? Or is he the Messiah, the Christ, the Son of the Living God? For if you believe he is the latter, then you can not, CAN NOT, live any other way than he lived, healing the sick, feeding the hungry, and lifting up the lowest members of society – sacrificing yourself for the sake of others. If you believe what we say every Sunday right after the sermon in the Creed, that Jesus is God’s only son, the savior and redeemer of the world, then you can not simply go home and live your life the same way you’ve been living it before. Because you have been transformed into a member of Christ’s body and are called to serve the world, along with all the rest of us, by sharing your own unique gifts and talents to bring about the kingdom of God here and now. You are called to be a living sacrifice, to show the world the love of God in everything you think and say and do, no matter what it costs. On you, Christ has built his church.

This is not an easy task; the world will demand that you conform to its rules: that might makes right; that we should always put ourselves before the other guy; that money, fame and power are all that really matter; that injustice and greed are simply the way that things are. It will require the renewal of our minds and detach ourselves from the noise and clutter of the world. But if each of us here and in every church truly believes that Jesus is the Messiah, how can we do anything else? As disciples of Jesus Christ, we are called to turn our backs on the clang and noise of the world, and focus on the only thing that matters – doing the will of God.

Jesus asked his disciples his question so that they would understand that they had a choice: they could go along as they had been going, conforming to the world, following the powers and expectations of a powerful and corrupt society. Or they could be transformed by the power of the Living God to become the body of Christ, sharing their unique gifts with each other and with the rest of the world.

Jesus asks each of us the same question: “Who do YOU say that I am?”

Thanks be to God.